India is in a comfortable position to reach semifinals & will no doubt reach to the next stage.

So what does that mean for us?

As this is the last game where they can experiment a few players & give them a chance before the important stage of the tournament, you might again see a few changes.

There are 15 members in squad, out of which Only Mayank Dagar & KV Sasikant hasn’t played & Virat Singh played last game but he didn’t got the chance to bat .

So it seems logical & highly risky to take all three, Virat Singh is basically an Opener, so he might even open or play at 3 if he’s given another game.

Now what you can do?

Play with 2 teams today, first one with all these changes & high risk & play 10 & 20 members with less investment
& second team with all basic players & no risk at all for small leagues.

You’ll win  either way, i have posted a sample of 1st team considering all expected changes ,you can make 2nd team by taking all those players who played in the last games like Seth, Chahar etc. 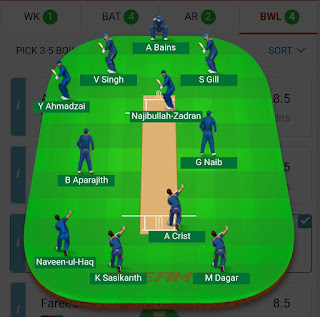