Home Cricket Tips PAK Vs WI 2nd T20
Facebook
Twitter
Pinterest
WhatsApp
Nobody expects from WI the way they play Pak in T20’s.
They are are much much better side than the way they have performed in recent times specially against Pakistan.
This match is in Port of Spain which is again a dry & good batting surface with 160 average score.
Probable 11
WI- Simmons, Lewis, Walton, Mohammad/Powell, Samuels, Pollard, Narine, Badree, Brathwaite, K Williams/Taylor, Holder
Pak- Akmal, Shehzad, Malik, Babar, Sarfraz, Hafeez,, S Khan, Imad, Wahab, Hasan, Tanvir
Don’t try to play grand league in 5-10 members league by experimenting too much.
I have already got a few mails asking How about making Jason cap for small leagues?Great for grands, not for small leagues.
1) Even though Powell is not confirmed to play but he’s currently my favourite player in WI team & surely the one to watch out in this series
2) Zaman has to wait for his debut & Hafeez should get another game.

You arre free to choose your own cap & vc. 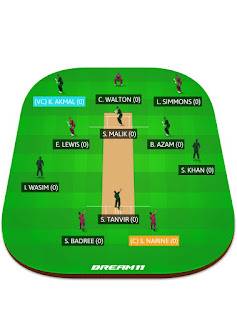