Mayank Agrawal: One of the most consistent player in Indian Domestic Circuit right now & should be the one to watch out for RPS this season, should get them good flying starts at the top.

Rahane: Not someone who’ll make a 25 ball 50, but surely someone who consistently makes 40 ball 50.

Interestingly, he made 40+ in every second inning for RPS last season.

Krunal Pandya: Perfect pinch hitter & a decent left arm spinner. Has been in a superb touch after recovering from injury & could bat up the order again.

Zampa: Performed exceedingly well in the last season for RPS & then for Australia.
As he’s a retained player, he should get a nod above no.1 T20 bowler Tahir.

Stokes :The higest paid player, but does highest value always means highest points?
Certainly not. RPS already has a great batting line-up, he’ll bat at 5 or 6. Can only get enough balls to play if top order fails.

So the point is, don’t blindly go for Stokes as cap in every game access the conditions well & then decide.

Rayudu: Either he plays too good or too bad, nothing in between.

His recent form has been a roller coster ride but if MI batting collapses which i expect it will, he’ the one you can rely upon. 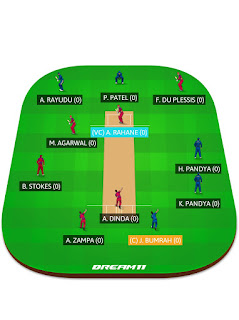 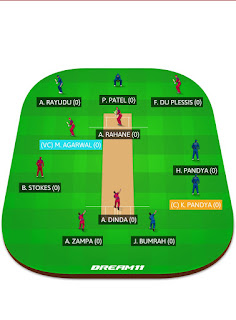