By admin
April 10, 2017
11
15
Share
Facebook
Twitter
Pinterest
WhatsApp
Backing KXIP to be the underdogs for IPL 10 from day 1
With their complete team performance in their first game, they proved why they are my favourites to win this year’s  IPL.
Coming to this game, the question of the day is
“Will ABD play?” & the ans is ‘Most likely’ he will.
As per his recent fans release, he’s ALMOST  fit & available.
but that word ‘Almost’ brings some level of uncertainty for today’s game.
Chances of playing: 99% (Toally your call to take him or not, i’ll not leave him the kind of form he’s in)
Probable 11 of both teams:
RCB- Gayle, Watson, ABD, Jadhav, Mandeep,  Vinod, Binny, Chahal, Abdullah/Negi, Mills
Aniket/Arvind.
KXIP- Amla, Vohra, Maxwell, Miller, Saha, Stoinis, S Sharma, M Sharma, APatel, Natrajan, S Singh
Whoever expects Morgan will play on Amla’s place, go ahead & try your luck for grands because i don’t think so. 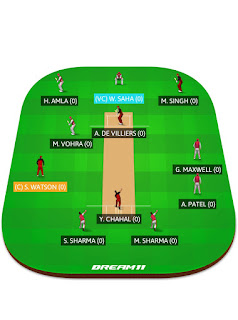 Useful Stats for this game:

1)  Gayle has the record of most runs against a single team (near to 800) & that team is KXIP.
2) Sandeep Sharma has a terrific record against Gayle dismissing him most number of times in IPL. (With Bhuvi).
3) Our poster boy ABD too has a great record against KXIP specially in away games.
4) Out of last 11 games at Holkar stadium, Indore, 7 have been won by side batting first.
Modifications that you can make to the team for small leagues:
1) Include Gayle if you want on Mandeep’s place
2) Replace Vohra/Amla with Miller if you want.
3) Mohit Sharma with Natarajan or Mills.