KXIP has only 3 overseas places available & they have

1) Amla: Considering KXIP’s other batsman, he has still been consistent but you can never rely on an overseas player in IPL. Remember, Shakib?

3) Morgan: Has got two chances, have failed but might get another one.

4) Stoinis: Last year’s hero for KXIP, did nothing till now. He’s been training hard in the practice session & might be back to 11.

5) Matt Henry: Was available from game 1 but didn’t needed, might not be used again

6) Marsh: He’s also available & can come into the side as an opener or as a specialist no.3

7) Miller: Hasn’t scored a fifty for KXIP since 19 innings but they should again back him as they highly rate him & have always backed him, no matter how badly he had performed.

So better to leave all of them as nobody is confirmed to play, wild guesses are good for grands but not for small leagues. 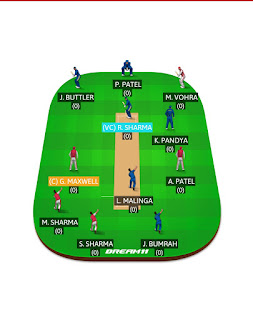 In team 2, take Saha as wk (If he bats up, can be a good pick but they shuffle their batting order in every game)

& take anyone among above mentioned overseas pick for KXIP which you feel can play.
Leaving Amla is a big risk, so you can take him in your second team but at your own risk.